Weekends are among my favorite time of the week, largely because I get to close up my laptop and hit the kitchen. One of my favorite breakfast treats to make is anything with my basic brioche recipe. I first developed the recipe as part of my new book Quick & Easy Breads which features a Cinnamon Streusel Brioche Bread recipe you can also find here on the site. The brioche was one of the first breads that I made for that book and it’s become a staple in so many twists over the last few years.

My favorite twist is turning this loaf of bread into delicious morning buns. I’ve used the cinnamon streusel as a base for amazing cinnamon rolls and in the fall I enhanced those rolls even further with a Pumpkin Cinnamon Brioche Roll recipe. 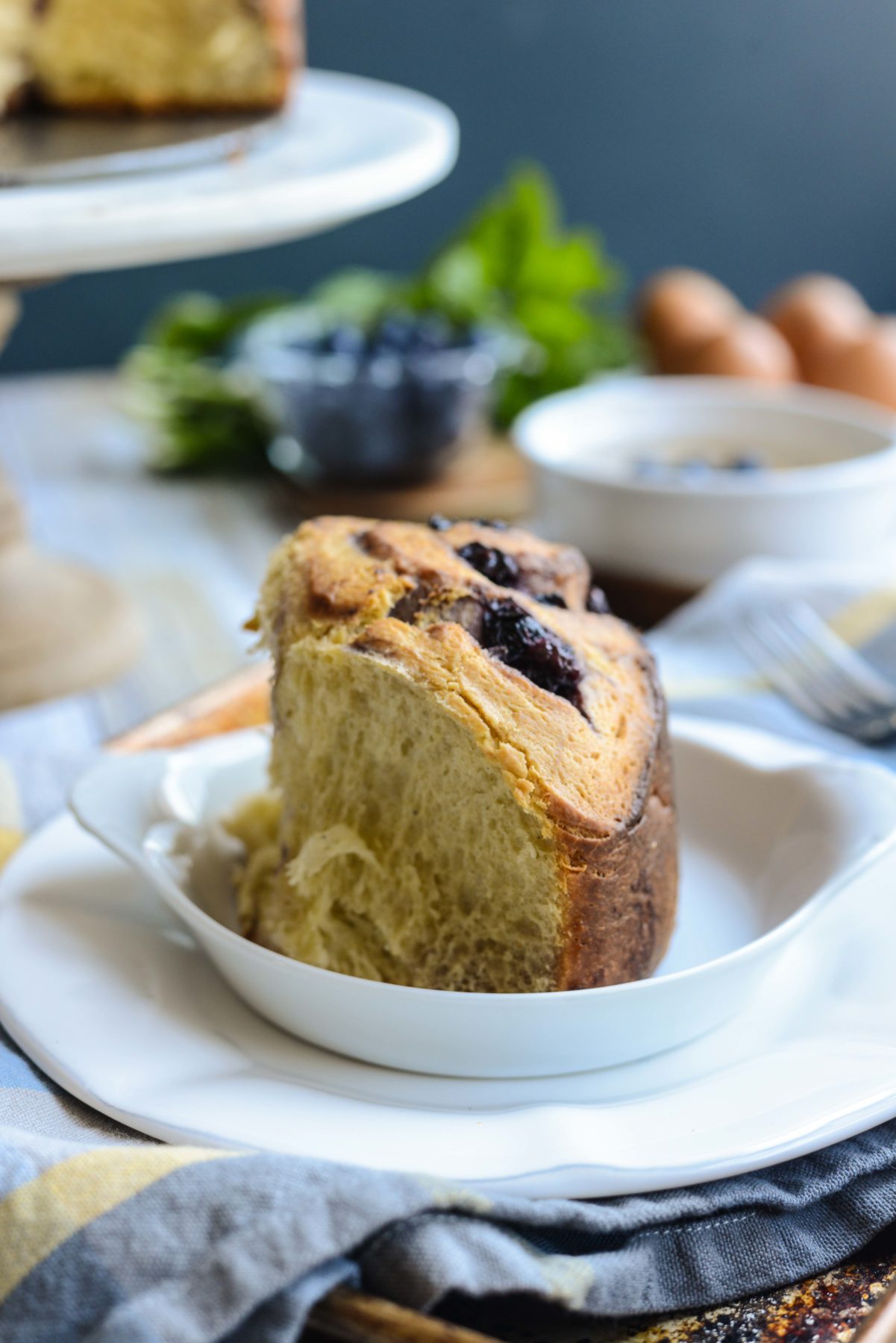 Now we’re going all out Blueberry! This twist came to me the other evening and I have to say, the result just turned up morning coffee a notch in which we may not return. As with most of my cinnamon roll recipes, I started out with that basic brioche recipe, but this time gave it an extra special touch with some ground cardamom – the nordic in me always loves a good excuse to use some cardamom. And in lieu of that cinnamon and brown sugar swirl, I whipped up a blueberry compote to use and wow, was that ever a good decision.

Weekend mornings here in New York City are always a time to kick back and relax, and with special treats like this – well let’s just say the neighbors are really glad we always have leftovers.

Start by making the blueberry compote. Place a small sauce pan over medium heat and add the blueberries, sugar and corn starch.  Be sure to stir frequently and cook until the blueberries break down (you can give them a bit of a mash when they begin to soften) and the sauce is somewhat thickened (about 10 minutes).  Remove from the heat and place in a bowl. Cover and refrigerate.

While the blueberry compote is cooling, begin making the brioche dough. In a kitchen mixer fitted with a dough hook, add the warm water, dark brown sugar and yeast and stir slightly.  Next in a separate bowl measure out the flour, salt, and cardamom and sift together.  In another small bowl place the eggs and beat slightly. And in a 3rd bowl (I often just use a two cup glass measure) place the melted butter.  Begin bringing the dough together with the mixer on medium speed (just enough to not toss flour everywhere). Slowly combine the flour mixture, egg and butter alternately until all is added to the mixture.  Knead the dough for roughly 3-4 minutes until it comes together and is well mixed.  Allow to sit for about 10 minutes.

Now to prepare the rolls.  I highly recommend using sheets of parchment paper to roll the dough between, it prevents sticking and makes it easier to roll up the buns.  Place the rested dough between two sheets of parchment and roll the dough to make an 11 x 17 inch rectangle with the dough roughly 3/8 – 1/4 inch thick. You may elect to trim the edges and place the extra dough in the corners to even out the rectangle shape.

Now remove the top piece of parchment paper and spread the blueberry compote across the entire surface leaving the final 1/2 inch around the edges clean to provide a nice seal. Next decide if you want 6 rather large buns (shown in the photos), or 12 smaller buns. If you want the large buns, roll the dough starting starting with the 11 inch side so that your resulting log is approximately 11 inches in length.  For the smaller buns, roll along the 17 inch side so your resulting log is approximately 17 inches in length.  Gently roll the buns using the parchment paper to help ease the dough into a nice tight spiral.  Then gently roll the dough onto a piece of cling film/plastic wrap and wrap the log up to seal it tightly twisting the ends to form a nice seal.  Place the log onto a baking sheet and place into the refrigerator for 2 hours up to over night in order to firm up.

When you are ready to make your morning rolls, preheat your oven to 350 degrees F and remove the dough log from the refrigerator. Next divide the dough either in six or 12 pieces and using a sharp knife slice the log to make equal heigh buns.  These will fit nicely into either a 9x 13 baking dish for a dozen morning buns, or a 9 inch spring form pan for 6 large morning buns.  Place the dough into the pan and bake for 45-60 minutes depending on your oven.  You may want to tent your morning buns with aluminum foil mid way through to prevent burning.

When done, remove from the oven and allow to cool for approximately 10 minutes before serving. Enjoy with a side of plain greek yogurt, some granola and honey with a few blueberries on top. 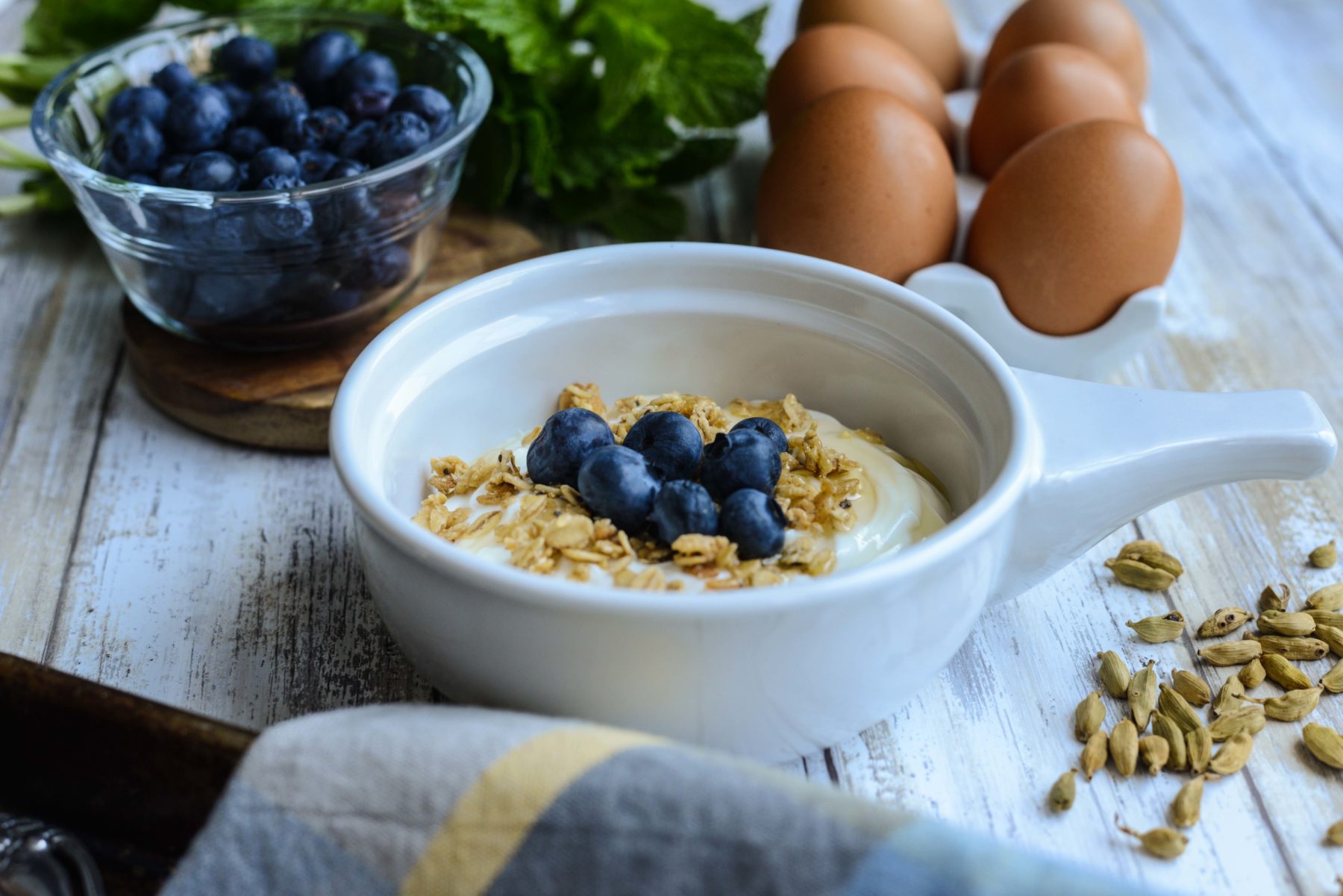