Weekend breakfasts are made for something a little extra special. This weekend the creation were amazing Cinnamon Graham Pancakes. I love whipping up a quiche, maybe a special morning bread for french toast, or perhaps you want to spice it up even further. If you follow this site, you know that I have an affinity for experimenting with different flours.

If you follow this site, you know that I have an affinity for experimenting with different flours. And I’m not talking just whole wheat flour, but I love tossing in dark rye flour, corn flour, almond flour, and graham flour. The subtle nuance that these whole wheat ingredients can bring to a recipe can’t be overstated enough.

For the past several weeks I’ve been secretly craving pancakes. There is just something absolutely satisfying about a rich batter flap-jack smothered in butter and drizzled with maple syrup. But this weekend I wanted something a bit different than the easy out-of-the-box, just add water standard. Yes, even I jump for shortcuts from time-to-time. I knew I wanted to create something a bit extra special so I turned to a trusted mentor and quickly googled a pancake recipe from Ina Garten. 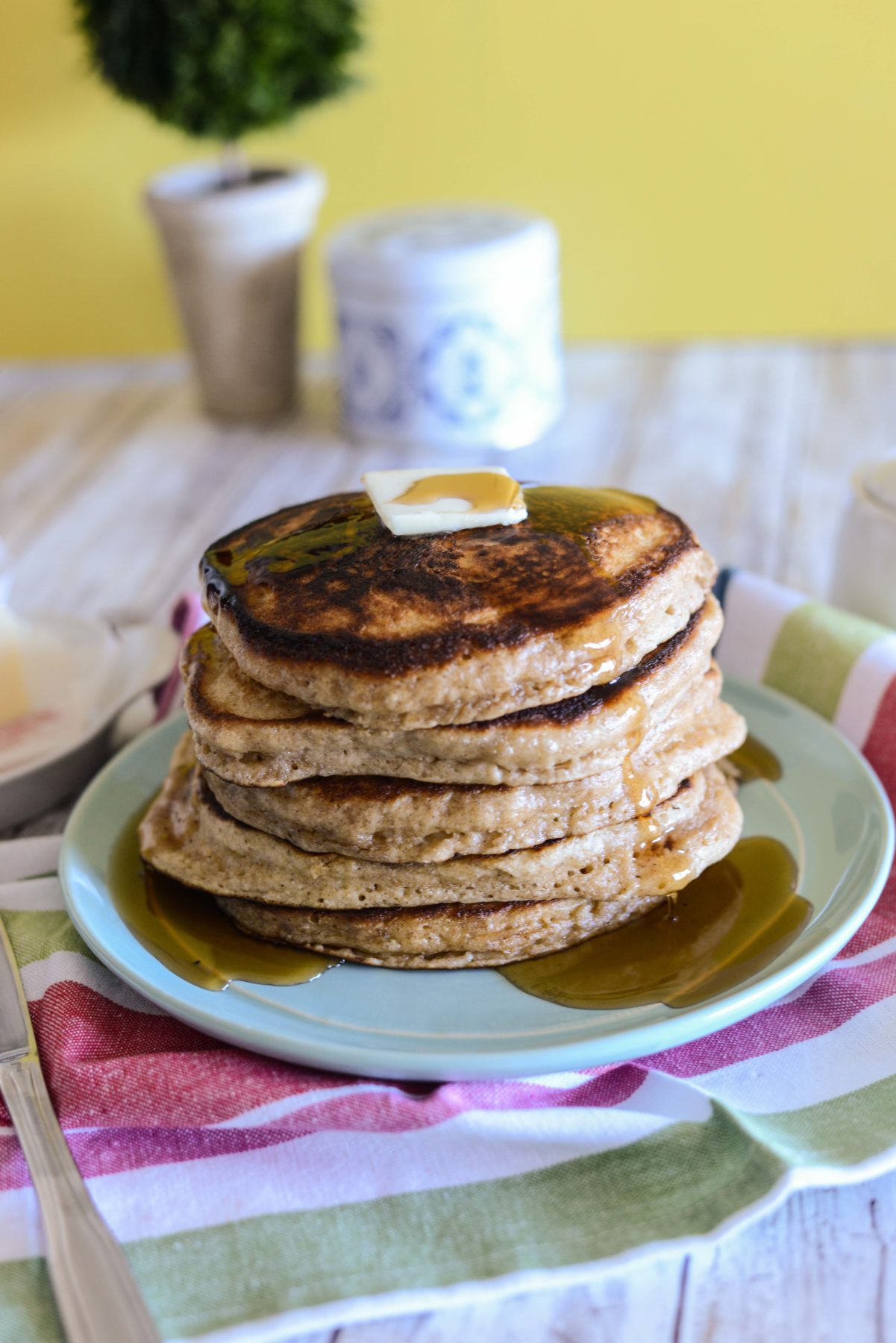 Now, if you venture over you’ll notice that this recipe has a lot of similarities, but at the same time gives you a whole different flavor. I love substituting in my whole grain flours and this was no exception. With a division of the flours to bring in graham flour and the addition of a little spice, this recipe takes on new heights and will get you off to a great start to your weekend adventures.

Butter for cooking and Maple Syrup for serving

In a mixing bowl, whisk together the all-purpose flour, graham flour, baking powder, salt, sugar, and cinnamon. Create a well for the sour cream, eggs, and milk.  Whisk together all ingredients until just combined and smooth and set aside for about 5 minutes.

Heat a large skillet over medium heat and add 1 tablespoon of butter and melt until it just starts to bubble.  Using a 1/2 cup measure, pour 1/2 cup of batter into the skillet and gently spread out to make an approximately 5-6 inch pancake. Cook for 2 to 3 minutes or until bubbles start coming through the top and the underside is nicely browned.  Gently flip the pancake and then cook for another minute until browned and cooked through.  Wipe out the pan with a paper towel, or leave the browned butter in the pan for an added nutty flavor.  Add more butter to the pan and continue cooking pancakes until all the batter is used.

If you have a larger skillet or griddle, make more than one pancake at a time. If using a standard skillet, you can use a glass mixing bowl to cover finished pancakes to keep them warm before serving.  (Trick:  Place a paper towel on the plate and cover the finished pancakes with paper towel to absorb extra moisture that will come from the covered pancakes).