This was absolutely amazing! I needed a showstopper dessert for Easter dinner with extended family this year and this stroke of inspiration is the result, a Lemon & Lavender Pavlova. One of the books I’m currently working on is all about the delicate infusion of lemon and lavender. It’s an amazing flavor combination when done right.

If you are one of our followers in the UK you know what this is all about. For those of you in the states that haven’t experienced the Pavlova craze yet – all I have to say is, What Are You Waiting For!?! It really is an amazing dessert.

When you hear the term Pavlova you probably instantly think of a Russian dancer, and you wouldn’t be far off. The Pavlova is a meringue-based dessert that was named after the Russian ballerina Anna Pavlova. Traditionally the dessert is made of a meringue base that has a crisp crust and a soft, light inside that is topped with whipped cream and fruit. The dessert is believed to have been first created in honor of the dancer either during or after one of her tours to Australia and New Zealand in the 1920s and is a popular capstone for holiday feasts. 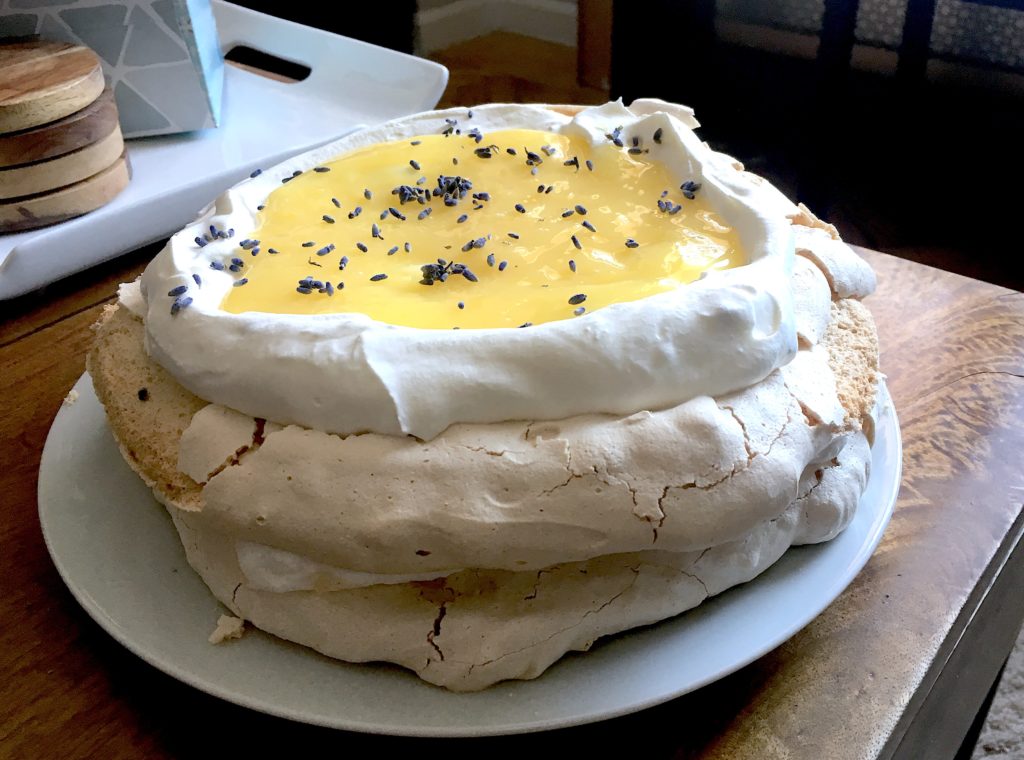 My variation on the theme omits the fruit (although if you are feeling it, go ahead and top with your favorite berries) and puts the focus on the lemon curd. Honestly, this ended up better than I had expected and turned out to be the absolutely perfect dessert for spring. It’s light, fresh, creamy and lemony with the hint of floral from the lavender. I don’t know about you, but frankly nothing screams spring like this dessert did.

Here’s how you make it.

For the lemon curd, place the sugar, cornflour and 2 cups water in a large saucepan and stir until you have a smooth mixture. Stir in the lemon juice, egg yolks and salt. Place over a medium heat and keep stirring while the mixture comes to a boil, continue to cook for about 10–12 minutes. Stir in the lemon zest and butter until the butter has melted, then remove the pan from the heat and allow to cool.

For the meringue, heat oven to 300 degrees F. Using a pencil, mark out 2 circles the circumference of a 6 inch baking dish on baking parchment. Whisk the egg whites with a hand mixer until they form stiff peaks, then whisk in the lavender sugar, 1 tbsp at a time, until the meringue looks glossy. Whisk in the vinegar, cornflour and vanilla.

Divide the meringue evenly between the two circles and spread the meringue inside each circle, creating a slight crater by making the sides a little higher than the middle. Bake for 1 hr, then turn off the heat and let the Pavlova cool completely inside the oven.

Before assembly, whip the heavy cream along with 3 tbsp lavender sugar.  Place one meringue disk on a cake platter or stand, spoon a nice dollop of the whipped topping and spread within the first layer, then drizzle half of the lemon curd over the whipped topping, place the next disk on top and repeat.  Finally garnish with the candied lemon peel and lavender sprigs or buds. Serve right away.

Tip:  Make this ahead and assemble right before serving storing the meringue disks in tightly sealed plastic bags, and storing the lemon curd in the fridge.