If you haven’t noticed, peaches have been on special in the markets the past few weeks. That’s because it’s officially in season for peaches here in the U.S. and that means – well – lots of yummy peaches to make lots of yummy goodies with! And this leads us to the creation of the Peach Graham Crumble Bar.

Now, I get a lot of questions from followers on how I come up with my recipes and this recipe may completely demonstrate that random process in the kitchen that leads to what you see on Pumpernickel&Rye. As with many dishes created by myself and fellow food bloggers they start with inspiration or something we stumble upon on Pinterest or via other sites. This recipe began it’s journey about 3 weeks ago when I had extra blueberries in the fridge and I decided to whip up a treat of some sort. Sure I could have made one of my main stays, a fruit filled galette, or maybe some of that delicious blueberry ice cream we made earlier this summer. But as is often the case, I wanted to try something completely new.

I headed out on Pinterest for inspiration, “blueberry recipes” was the search and it lead me to a recipe from Fiona at Just So Tasty. And I’ll be honest her Blueberry Oatmeal Crumble Bars were amazing. Interestingly enough Fiona’s recipe is inspired by an adapted recipe she created that was inspired by a recipe for Blueberry Crumble Bars at Smitten Kitchen. Seeing the pattern?

Now I had made Fiona’s Blueberry Oatmeal Crumble Bars a few weeks back and when I had a couple of ripe peaches in the fridge needing to be used up I immediately knew that Fiona’s recipe could very well be the base for something incredibly special.

Now with everything that I do in the kitchen it starts with an initial plan, in this instance the original recipe from Fiona, but then twists started to occur as I dove into my cupboards. First was the flour split and addition of graham flour – such a great idea! Then came the addition of my go-to Crumble Spice blend and a dash of cardamom. Next of course was the obvious swap of peaches for the blueberries and orange juice instead of lemon juice. All spontaneous selections that come together to make something extra special. 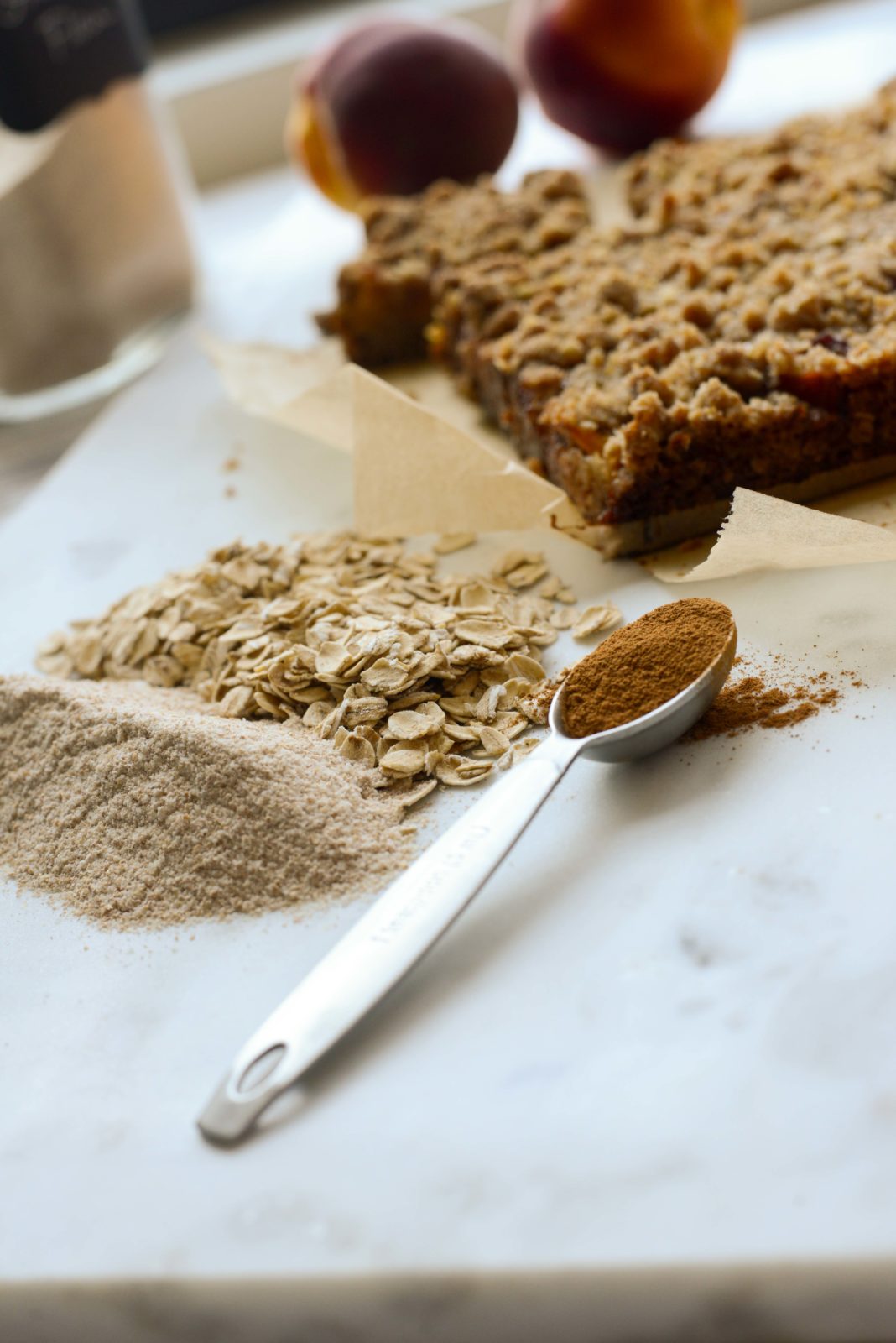 So there you have it, a little glimpse of the journey of a new recipe. It really can come from anywhere, a walk through the farmer’s market, a spontaneous idea, a perusal of Pinterest, or just necessities of using up ingredients in the fridge and grabbing alternatives from the pantry. Either way it happens, I’m so excited to bring my successful creations to Pumpernickel&Rye and share them with you.

If you find this recipe interesting, we’d suggest you check out our Peach Tea Spice Cake Recipe and our Homemade Peach Tea.

Preheat oven to 350 degrees F. Prepare an 8×8 pan by lining with parchment paper secured with cooking spray. In a large mixing bowl add the dry ingredients for the base and crumble topping and blend together with a whisk. Add in the melted butter and egg yolk and whisk until well combined and crumbles can be formed. Reserve 1 cup of this mixture for the crumble topping. The remaining mixture is pressed firmly into the base of the baking pan creating a solid base for the bars.

Place in the oven and bake for 40-45 minutes or until the peach filling is bubbly and the crumble is nicely browned. Remove from the oven and allow to cool slightly before removing from the pan.

Serve with vanilla ice cream or whipped topping and fresh peaches for garnish.