I recently ventured down the road of homemade pasta as part of my never-ending quest to infuse good, wholesome food into our everyday diet. I scoured the internet and found an inexpensive pasta roller on Amazon (I certainly wasn’t read to splurge on a several hundred dollar contraption if I decided this just wasn’t for me).

In our household we consume ALOT of ravioli – largely because it’s a nice way to get added nutrients and protein in a simple to make pasta dish. Only problem with this is the expense – fresh ravioli in the store is not cheap. I had seen them make it in a store near the Flatiron building and was convinced that this was just too easy to not make my own at home.

Alas, the day finally arrived when the pasta roller was in my possession, along with a ravioli press that I had purchased to make the task just a little easier. To my surprise, making our own ravioli at home was a snap!  The basic mix for pasta dough is pretty easy.  2/3 cup flour, 1/4 tsp salt, 1 extra-large egg.  Using a food processor is certainly wise (we have a small 4 cup processor – if you have a larger one, feel free to do a double batch), place all the ingredients in and process until a dough forms that is the consistency of play dough.  If the dough doesn’t come together (you might have a small egg) just add a little bit of cold water until it comes together – if the dough is too wet add a little more flour until it comes together just right.  This process make take a few tries at first – but once you get the hang of it, I promise – it’s super easy and then you can get creative!

For a creative twist, I’ve added in diced red bell peppers, a favorite seasoning, and even switched up flours (like whole wheat that is in the recipe below). 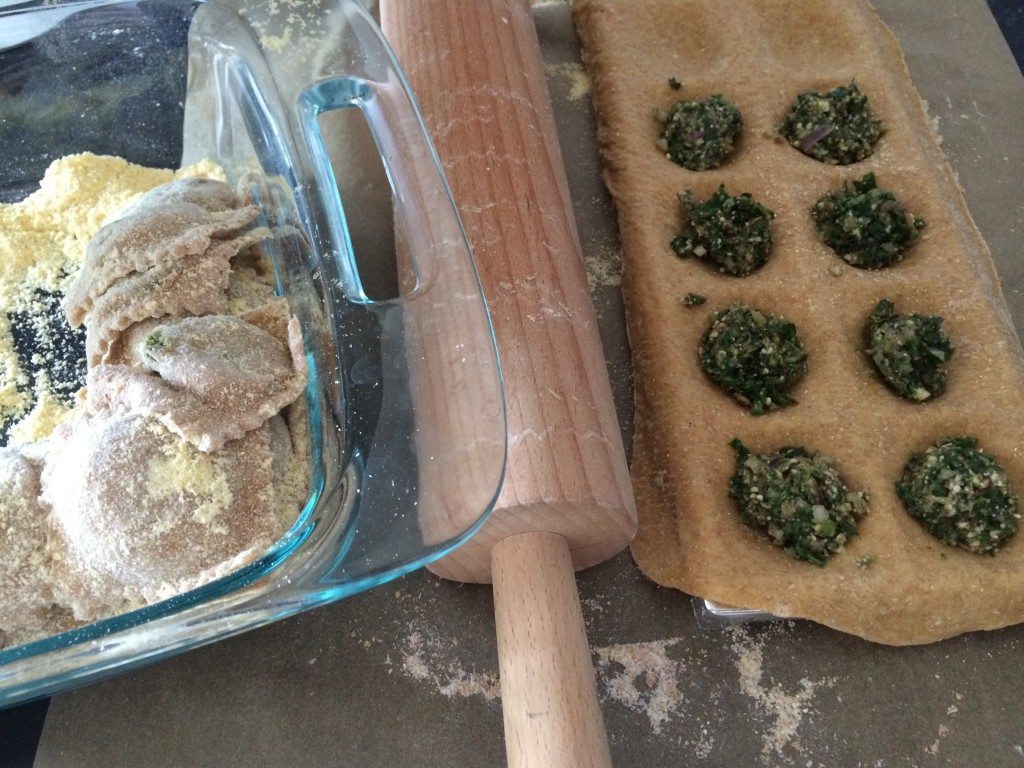 To prepare the filling, process together all ingredients until they are well chopped and combined (should look like the filling you see above in the picture). For the pasta dough, in a food processor combine flour salt and egg and process until a dough ball forms. Add cold water little by little if needed to coax the dough into a formed ball.

Take your dough ball and run it through your pasta press according to the instructions included with your press – this is critical to use a press, a rolling pin will not do the trick. You will start on the highest setting, folding the dough over on itself several times (about 4-5) before starting the process of tightening the press setting.  I pass it through the press once for each setting until I’m down to the 2nd to the last thinness setting on my press.

Next, layout the dough on the table (or in a ravioli press if you have one) and place 1 tsp of filling in the middle of what will eventually be your ravioli squares.  Only do this for half of your sheet of pasta dough you have just rolled out. Next fold over the other half to cover the first half.  Lightly press to seal around all of your mounds of filling.  Next with a pizza cutter or knife cut out each ravioli.

To keep your raviolis from sticking to each other, toss in corn meal. Pasta is best when cooked within a few hours – just toss in boiling water f0r 3-5 minutes, drizzle with butter, and enjoy.